By now your team is likely deep in the throes of the team challenge, and all that it entails! This month we want to focus on the importance of the Team Choice Elements. They are a very large and important scoring element on tournament day, and should not be left until the end. As you advance from State to Globals, these elements increase in overall importance, as the level of competition increases. Below is a great article about choosing them. 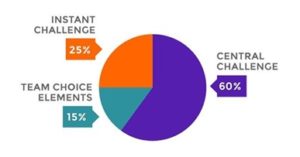 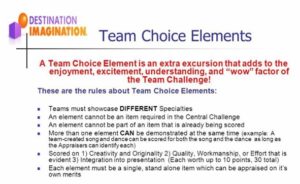 The Icing on the Cake

The team choice elements are like the icing on the cake. They are the delicious extra that sets off the main course! Team choice elements give team members the chance to “show off” their special abilities and talents for the appraisers. This is the part of the competition that lets the team choose two things they would like to be scored on.

While we talk about costumes here, there are many other examples that are similar

The difference here is that as the scope of the team choice element is broadened, the appraiser has to look at more items to give the score. If some items in the group are not as creative or well made as others, then the score might be less because the appraiser would have to take into account all of the items. If one costume is truly creative and well made, it might be better to choose that one costume instead of choosing all costumes. If all of the costumes are creative and well made than the team might score better.

The team may designate as a team choice element one of the following:

Again, we are looking at whether to choose a narrow or broad definition of the team choice element. If the appraiser looks at the backdrop as a whole, there is much to consider in giving the score. Even if the team chooses the entire backdrop, they could still describe the specific aspects of the backdrop that they would like to have scored.

How to decide on team choice elements and specialties

Team Choice Elements are free-choice scoring opportunities provided as adjuncts to the main Challenge. They allow a team to have two whatever-they-want opportunities to showcase something they’ve done and have it evaluated.

To see what is desired, one must look at the scoring, for that is where the rubber meets the road in understanding what a Challenge seeks.

Theoretically, a team will pick two items which are team strengths or for which they have a prodigy team member, and exhibit them. Since they are team-selected areas, the scores should be high–or so a team might hope. (In reality, these are subjective scores, so they tend to be mid-range except in cases of a talent prodigy–and even then, often.

Like with all aspects, definitely help younger kids have realistic expectations to avoid later problems.)

So, with the team: what are your strengths? Where do you think you will shine? Then, with that in mind, they can attack the Challenge.

OK, HOW does a team go about developing and/or selecting items for their Team Choice Elements.

Some time before the team presents their solution at the tournament, the team must pick which of these various “experiments in creativity” represent their “best two”. They should then spend a bit of “focused energy” to refines these items further (keeping in mind that appraisers who see them for the first time will be evaluating them). The team should also spend some time creating a nice, focused description of WHY these items uniquely demonstrate the creativity and workmanship of the team.

Have the team look at what they are most excited about and proud of, and those become the team choice elements. Take extra time in the last few days to make sure that the things that they chose are the best that they can be.

Tacking on a Team Choice Element

A WORD FROM THE BOARD…

The Board of Directors and Affiliate Director would like to thank all of you that registered early for this season and those of you still in the process of registering! We’re looking forward to this year’s State tournament and seeing all of the solutions your teams come up with. Please be on the lookout for the tournament schedule and information during the first and second week of February. During this time we will also be sending out order forms for t-shirts and pins, which will be Celebrating Creativity and the 20th Anniversary of Destination Imagination!

MOVING ON TO STAGE 3…

Stage 3: Focusing: Putting your Solution Together

Length of this Stage: Approximately 2-4 weeks

What Happens in this Stage of the Process

The Team (with Team Manager facilitating) should:

The Team Manager should:

Length of this Stage: Approximately 2-4 weeks

Team Time: As many hours as it takes to complete the solution and prepare for the Tournament!

What Happens in this Stage of the Process

The Team (with Team Manager facilitating) should:

The Team Manager should: